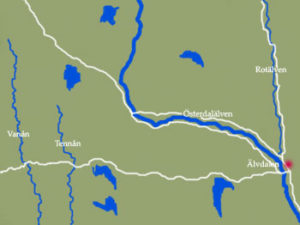 Älvdalen offers a great variety of fishing possibilities. Besides the rivers, Österdalälven, Rotälven, Vanån and Tennån there are over 400 lakes and ponds in the area. In the streams and rivers there are mainly trout and grayling, in the small forestlakes trout and char. There are also many lakes that holds pike and perch. Most of the waters are easy to get to, since there are miles of small roads in the whole area. But there are also places, far from the roads, deep into the wilderness for all you adventurers.

Fishingseason
The fishing in the rivers and streams is on top from the beginning of may til the end of july. During this period the hatching of all the insects take place. But also the sep-okt fishing for grayling is fantastic. In the lakes it starts in june and goes on to late September.

Fishingtechniques
In the rivers the best way to catch trout and grayling is with a flyrod. Flyfishing is also a very good way to catch char and trout in the lakes. Though using a spinning rod is a more common way to fish the lakes for pike, perch and trout. Although pike is mostly caught with a spinning rod in the lakes, flyfishing for big pike is getting more and more popular.

Rivers and streams in Älvdalen
Please remember that the inhabitants in these waters are wild trout and grayling. Handle them with care and respect, and practice “catch and release”.

Rotälven, 46 km River that runs through plain wilderness. In the upper parts there are only trout, but in the lower stretches there are also grayling.

WE ARE HAPPY TO SHARE OUR EXPERIENCE WITH YOU!

DID YOU KNOW THAT:

There are over 400 lakes and ponds in the area.

This website uses cookies to improve your experience while you navigate through the website. Out of these cookies, the cookies that are categorized as necessary are stored on your browser as they are essential for the working of basic functionalities of the website. We also use third-party cookies that help us analyze and understand how you use this website. These cookies will be stored in your browser only with your consent. You also have the option to opt-out of these cookies. But opting out of some of these cookies may have an effect on your browsing experience.
Necessary Always Enabled
Necessary cookies are absolutely essential for the website to function properly. This category only includes cookies that ensures basic functionalities and security features of the website. These cookies do not store any personal information.
Non-necessary
Any cookies that may not be particularly necessary for the website to function and is used specifically to collect user personal data via analytics, ads, other embedded contents are termed as non-necessary cookies. It is mandatory to procure user consent prior to running these cookies on your website.
SAVE & ACCEPT